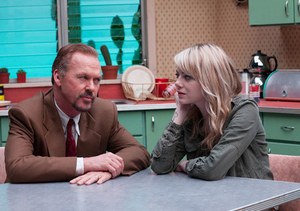 “Birdman or The Unexpected Virtue of Ignorance” is a black comedy that tells the story of an actor (Michael Keaton) — famous for portraying an iconic superhero — as he struggles to mount a Broadway play. Riggan Thompson was Birdman, a crime-stopping superhero with a beak and a three-film franchise. Now, he’s a washed up actor trying to get his career and life back together by opening his own play on Broadway. On the eve of it’s opening, the play is close to falling apart and Riggan is forced to sign a younger, egotistical lead actor, whom he despises. What results over the next three days is strange and dark as, leading up to opening night, he battles his ego and attempts to recover his family, his career, and himself. A tour-de-force performance by Keaton, fabulous directing and cinematography, and an unforgettable score. Nominated for nine Academy Awards, including best picture, best director, best actor (Michael Keaton), best supporting actor (Edward Norton), best supporting actress (Emma Stone). Vitals: Director: Alejandro Gonzalez Inarritu. Stars: Michael Keaton, Zach Galifianakis, Edward Norton, Andrea Riseborough, Amy Ryan, Emma Stone, Naomi Watts, Natalie Gold, Merritt Wever, Lindsay Duncan. 2014, CC, MPAA rating: R, 119 min., Drama, Box office gross: $28.566 million, Fox. Extras: TBA.