Battle of the Sexes

In the wake of the sexual revolution and the rise of the women’s movement, the 1973 tennis match between women’s world champion Billie Jean King (Emma Stone) and ex-men’s-

champ and serial hustler Bobby Riggs (Steve Carell) was billed as the Battle of the Sexes and became one of the most watched televised sports events of all time, reaching 90 million viewers around the world. As the rivalry between King and Riggs kicked into high gear, off-court each was fighting more personal and complex battles. The fiercely private King was not only championing for equality, but also struggling to come to terms with her own sexuality, as her friendship with Marilyn Barnett (Andrea Riseborough) developed. And Riggs, one of the first self-made media-age celebrities, wrestled with his gambling demons, at the expense of his family and wife Priscilla (Elisabeth Shue). Together, Billie and Bobby served up a cultural spectacle that resonated far beyond the tennis court, sparking discussions in bedrooms and boardrooms that continue to reverberate today.
Vitals: Director: Jonathan Dayton, Valerie Faris. Stars: Emma Stone, Steve Carell, Andrea Riseborough, Sarah Silverman, Bill Pullman, Alan Cumming, Elisabeth Shue, Austin Stowell, Jessica Mcnamee, Natalie Morales, Fred Armisen, Martha MacIssac, Mickey Sumner, Bridey Elliott, Eric Christian Olsen.
2017, CC, MPAA rating: PG-13, 121 min., Bio-Drama Comedy, Box office gross: $12.634 million, Fox.
Extras: “Raw Footage: Billie Jean’s Grand Entrance,” “Reigniting the Rivalry,” “Billie Jean King: In Her Own Words,” galleries. 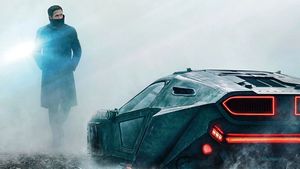 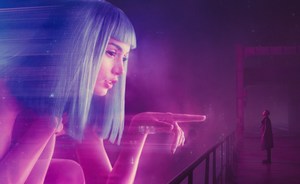 Ben Stiller stars as Brad, whose satisfying career, sweet wife and comfortable life in suburban Sacramento aren’t quite what he imagined during his college glory days. When he accompanies his musical prodigy son on a university tour back East, he can’t help comparing his life with those of his four best college friends who seemingly have more wealthy and glamorous lives. But when circumstances force him to reconnect with his former friends, Brad begins to question whether he has really failed or if their lives are actually more flawed than they appear.
Vitals: Director: Mike White. Stars: Ben Stiller, Jenna Fischer, Michael Sheen, Luke Wilson, Shazi Raja, Austin Abrams, Adam Capriolo, Erin Agostino, Pamela Figueiredo.
2017, CC, MPAA rating: R, 102 min., Comedy, Box office gross: $2.133
million, Universal.
Extras: “A Look at Ben Stiller as Brad,” “A Culture of Comparing Ourselves,” “Mike White on Directing His Own Script,” “The Story of Brad’s Status.”

Jackie Chan stars as humble London businessman Quan, whose long-buried past erupts in a 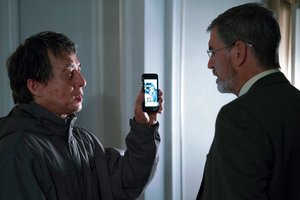 revenge-fueled vendetta when the only person left for him to love — his teenage daughter — is taken from him in a senseless act of politically-motivated terrorism. In his relentless search for the identity of the terrorists, Quan is forced into a cat- and-mouse conflict with a British government official (Pierce Brosnan), whose own past may hold clues to the identities of the elusive killers.
Vitals: Director: Martin Campbell. Stars: Jackie Chan, Pierce Brosnan, Katie Leung, Orla Brady, Charlie Murphy, Michael McElhatton.
2017, CC, MPAA rating: R, 113 min., Thriller, Box office gross: $33.769 million, Universal.
Extras: “The Making of The Foreigner,” interviews, trailers. 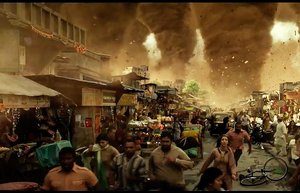 planet, that are armed with geoengineering technologies designed to stave off the natural disasters. After successfully protecting the planet for two years, something is starting to go wrong, and the system built to protect the Earth is attacking it. Now it’s a race against the clock to uncover the real threat before a worldwide geostorm wipes out everything … and everyone along with it.
Vitals: Director: Dean Devlin. Stars: Gerard Butler, Jim Sturgess, Abbie Cornish, Alexandra Maria Lara, Daniel Wu, Eugenio Derbez, Ed Harris, Andy Garcia.
2017, CC, MPAA rating: PG-13, 109 min., Science Fiction Action Thriller, Box office gross: $33.274 million, Warner.
Extras: “Search for Answers”: Inspired by his daughter’s question of why can’t global warming be stopped, director Dean Devlin retraces the creative journey that led to Geostorm. Blu-0ray adds ““Wreaking Havoc”: Cutting edge visual effects, research and technology create the world of Geostorm; “An International Event”: A global cast opens up about the secrets behind Geostorm.

At the end of the First World War, beloved children’s author A. A. Milne (Domhnall G 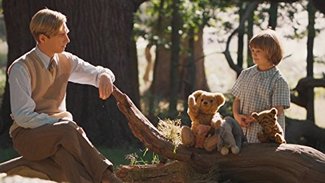 Original and inventive rewinding thriller in which a blissfully self-centered co-ed (Jessica Rothe) is doomed to relive the day of her murder unless she can identify her masked assailant and hopefully stop the madness. If she can’t, she will be stuck in an insane loop, reliving a ghoulish nightmare that has become her death day. Vitals: Director: Christopher Landon. Stars: Jessica Rothe, Israel Broussard, Ruby Modine.
2017, CC, MPAA rating: PG-13, 96 min., Horror-Thriller, Box office gross: $55.683
million, Universal.
Extras: Alternate ending, deleted scenes, “Cupcakes & Killers,” “You’ve Killed Me!,” “Tree’s Final Walk of Shame,” “Worst Birthday Ever” with the filmmakers and cast discussing the challenges of executing the time-loop concept at the center of the film, including how to make each day feel different despite the fact it’s being repeated, “Behind the Mask: The Suspects,” “The Many Deaths of Tree.”

Seven young outcasts in Derry, Maine, are about to face their worst nightmare — an ancient, shape-shifting evil that emerges from the sewer every 27 years to prey on the town’s children. Banding together over the course of one horrifying summer, the friends must overcome their own personal fears to battle the murderous, bloodthirsty clown known as Pennywise. Based on the Stephen King novel.
Vitals: Director: Andy Muschietti. Stars: Bill Skarsgård, Jaeden Lieberher, Jeremy Ray Taylor, Sophia Lillis, Finn Wolfhard, Wyatt Oleff, Chosen Jacobs, Jack Dylan Grazer, Nicholas Hamilton, Jackson Robert Scott.
2017, CC, MPAA rating: R, 135 min., Horror, Box office gross: $326.748
million, New Line/Warner.
Extras: “Pennywise Lives! featurette with Bill Skarsgård and how he prepared to portray the primordial creature known as Pennywise the Dancing Clown; “The Losers’ Club” with the teenage stars; “Author of Fear” with Stephen King as he reveals the roots of his best-selling novel, the nature of childhood fear and how he created his most famous monster, Pennywise; deleted scenes.

In the latest installment of the legendary “Saw” series, law enforcement officials 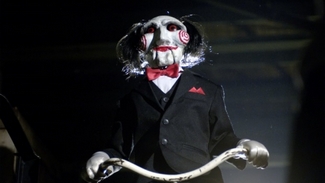 chase the ghost of a man dead for over a decade, embroiled in a diabolical new game that’s only just begun. Has John Kramer, the infamous Jigsaw Killer, returned from the dead to commit a series of murders and remind the world to be grateful for the gift of life? Or is this a trap set by a different killer with designs of their own?
Vitals: Director: Michael and Peter Spierig. Stars: Tobin Bell, Laura Vandervoot, Callum Keith Rennie, Brittany Allen, Matt Passmore, Hannah Emily Anderson.
2017, CC, MPAA rating: R, 91 min., Horror, Box office gross: $38.052 million, Lionsgate.
Extras: Audio commentary with producers Mark Burg, Oren Koules, and Peter Block; “The Choice is Yours: Exploring the Props” featurette. Blu-ray adds “I Speak for the Dead: The Legacy of Jigsaw” seven-part documentary: “A New Game,” “You Know His Name,” “Survival of the Fittest,” “Death by Design,” “Blood Sacrifice,” “The Source of Fear” and “The Truth Will Set You Free.”

The Killing of a Sacred Deer

Dr. Steven Murphy (Colin Farrell) is a renowned cardiovascular surgeon presiding over a spotless household with his ophthalmologist wife, Anna (Nicole Kidman), and their two 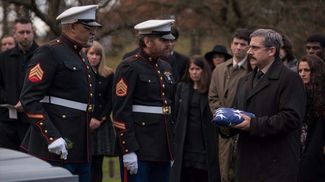 My Little Pony: The Movie

For Detective Harry Hole (Michael Fassbender), the death of a young woman — whose scarf is found wrapped around an ominous-looking snowman — during the first snowfall of winter feels like anything but a routine homicide. His investigation leads him to “The Snowman Killer,” an elusive sociopath who continuously taunts Hole with cat-and-mouse games. As the vicious murders continue, Harry teams up with a brilliant recruit (Rebecca Ferguson) to try and lure the madman out of the shadows before he can strike again.
Vitals: Director: Tomas Alfredson. Stars: Michael Fassbender, Rebecca Ferguson, Charlotte Gainsbourg, Jonas Karlsson, Val Kilmer, J.K. Simmons.
2017, CC, MPAA rating: R, 119 min., Mystery Thriller, Box office gross: $6.670
million, Universal.
Extras: “Cast of Characters” featurette, “Creating Jo Nesbø’s World,” “The Snowman Killer,” “Norwegian Landscape” featurette, “Stunt Files: The Sinking Lake.”

Thank You for Your Service

based on the bestselling book by Pulitzer Prize-winning reporter and author David Finkel. For Sergeant Adam Schumann (Miles Teller)—and many soldiers like him—the 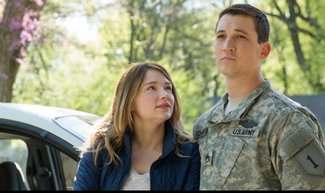 process of leaving combat back in Iraq was as seemingly simple as getting on that plane. But standing on the tarmac again in the arms of loved ones would turn out to be merely a first step in the long and exacting journey of actually returning home. The film follows a group of U.S. soldiers returning from Iraq who struggle to integrate back into family and civilian life while living with the memory of a war that threatens to destroy them long after they’ve left the battlefield. Vitals: Director: Jason Hall. Stars: Miles Teller, Haley Bennett, Joe Cole, Amy Schumer, Beulah Koale, Scott Haze, Keisha Castle-Hughes, Brad Beyer, Omar J. Dorsey, Jayson Warner Smith.
2017, CC, MPAA rating: R, 109 min., Drama, Box office gross: $9.479 million, Universal.
Extras: “Staging a War,” “The Battle at Home.”

Madea and friends are back in this follow-up to Tyler Perry’s comedy hit. When Brian’s 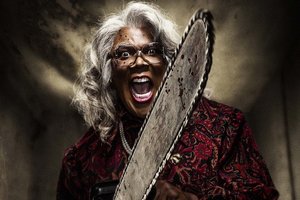