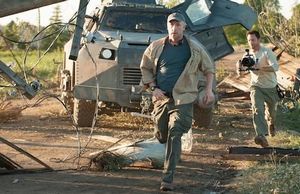 In the span of just a few hours, the city of Silverton is ravaged by an unprecedented onslaught of the most furious twisters they’ve ever seen. The entire town is at the mercy of the erratic and deadly cyclones, even as storm trackers predict the worst is yet to come. Most people seek shelter, while others run toward the vortex, testing how far a storm chaser will go for that once-in-a-lifetime shot. Told through the eyes and lenses of professional storm chasers, thrill-seeking amateurs, and courageous townspeople, the actioner throws you directly into the eye of the storm to experience Mother Nature at her most extreme. Extras: “Fake Storms: Real Conditions” featurette. Blu-ray adds “Into the Storm: Tornado Files,” “Titus: The Ultimate Chasing Vehicle.” Vitals: Director: Steven Quale. Stars: Richard Armitage, Sarah Wayne Callies, Matt Walsh, Alycia Debnam-Carey, Arlen Escarpeta, Max Deacon, Nathan Kress, Jeremy Sumpter, Kyle Davis, Jon Reep. 2014, CC, MPAA rating: PG-13, 89 min., Action, Box office gross: $46.659 million, Warner.