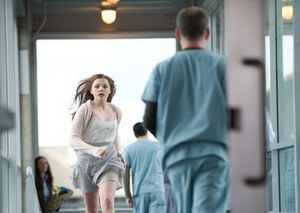 Romantic film based on the best-selling novel. Seventeen-year-old Mia Hall (Chloe Grace Moretz) thought the hardest decision she would ever face would be whether to pursue her musical dreams at Juilliard or follow a different path to be with the love of her life, Adam (Jamie Blackley). But what should have been a carefree family drive changes everything in an instant, and now her own life hangs in the balance. Caught between life and death for one revealing day, Mia has only one decision left, which will not only decide her future but her ultimate fate. Extras: “Never Coming Down” music video, free download of the song “Mind” from the “If I Stay” soundtrack, deleted scenes, commentary by R.J. Cutler and Alison Greenspan, music commentary, image gallery, theatrical trailer. Blu-ray adds “I Never Wanted to Go” music montage, three-part “Beyond the Page” featurette with interviews with the cast, crew and author Gayle Forman (“The Love of Music,” “Adapting If I Stay,” “An Out of Body Experience”). Vitals: Director: R.J. Cutler. Stars: Chloe Grace Moretz, Mireille Enos, Jamie Blackley, Joshua Leonard, Liana Liberato, Stacy Keach, Gabrielle Rose, Jakob Davies. 2014, CC, MPAA rating: PG-13, 123 min., Comedy, Box office gross: $49.128 million, Fox.