In a year of political incorrectness, “Hidden Figures” has to be the most politically correct film of the year. Based on a true story and adapted from the book by Margot Lee Shetterly, the film follows a group of African-American female mathematicians who served as the brains behind one of the greatest operations in U.S. history: the launch of astronaut John Glenn into orbit. Since this was the early 1960s, and Jim Crow 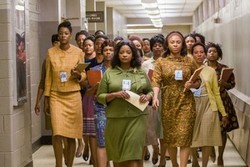 laws were still in effect — either overtly or covertly — the black women, despite their talents and abilities, were segregated and ostracized by the white NASA workers. The film revolves around three of these women, known as “human computers,” who quickly rise up the ranks of NASA alongside many of this country’s greatest minds to specifically calculate Glenn’s trip into space and to guarantee his safe return. The visionary trio, Katherine Johnson (Taraji P. Henson), Dorothy Vaughan (Octavia Spencer) and Mary Jackson (Janelle Monáe), had to fight rampant sexism and racism to cross all gender, race, and professional lines to succeed. And succeed they did, outsmarting the smug white scientists who just couldn’t belive that these women could be as smart as them. The film is predictable and by the book — we just know the women are going to win over the scientists, headed up by a curmudgeonly Kevin Costner — but it’s oh so much fun. Co-stars Kirsten Dunst, Jim Parsons, Mahershala Ali, Aldis Hodge and Glen Powell.
Vitals: Director: Theodore
Melfi. Stars: Taraji P. Henson, Octavia Spencer, Janelle Monae, Kevin
Costner, Kirsten Dunst, Jim Parsons, Mahershala Ali, Aldis Hodge, Glen
Powell.
2016, CC, MPAA rating: PG, 127 min., Drama, Box office gross: $153.291
million, Fox.
Extras: “It All Adds Up – The Making of Hidden Figures” five-part featurette: “No Limits – The Life of Katherine Johnson,” “The Right People for the Job,” “Recreating an Era – The Look of Hidden Figures,” “A Spiritual Journey – The Music of Hidden Figures” and “Moving the Decimal – Honoring Katherine Johnson”: deleted scenes; “Hidden Figures: Filming in Georgia”: audio commentary by Theodore Melfi and Taraji P. Henson; gallery.