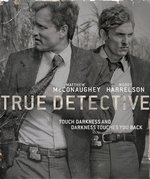 explores the underbelly of law, order, politics, religion and crime over the course of two decades in Louisiana (and, by proxy, America). In 2012, Louisiana State Police Detectives Rust Cohle (McConaughey) and Martin Hart (Harrelson) are brought in to revisit a homicide case they worked in 1995. As the inquiry unfolds in present day through separate interrogations, the two former detectives narrate the story of their investigation, reopening unhealed wounds, and drawing into question their supposed solving of a bizarre ritualistic murder in 1995. The timelines braid and converge in 2012 as each man is pulled back into a world they believed they’d left behind. As they look back on the case, Hart and Cohle’s personal backstories and often-strained relationship become a major focal point. Hart, an outgoing native Louisianan and family man whose marriage is being frayed by work stress and infidelity, is (at least on the surface) the polar opposite of Cohle, a lone-wolf pessimist and former narcotics detective from Texas. While the plot is moved forward by their shared obsession to hunt down the ritual killer, the drama also centers around the mercurial nature of Hart and Cohle’s relationship and personalities, and how they affect each other as detectives, friends, and men. In learning about each other and their killer, it becomes clear that darkness lives on both sides of the law. Superb performances by Harrelson and McConaughey. Formats: DVD, Blu-ray Disc. Extras: “Making True Detective behind-the-scenes look at the production of the series, featuring interviews with cast and crew and including never-before-seen footage from Episode 4; “Up Close With Matthew McConaughey and Woody Harrelson” interviews with the stars about filming the series; “A Conversation With Nic Pizzolatto and T Bone Burnett” in-depth discussion with the series writer/creator/executive producer and the legendary composer on both the series and the pivotal role music played in the show’s development; “Inside the Episode” in which Pizzolatto and director Cary Joji Fukunaga discuss character development and offer insights into each episode of the series; audio commentaries featuring Pizzolatto, Burnett and executive producer Scott Stephens; deleted scenes.  (HBO).