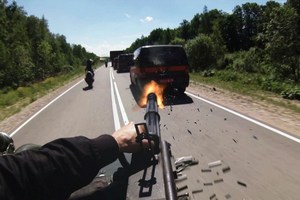 The first film shot completely in first-person shooter perspective. You remember nothing. Mainly because you’ve just been brought back from the dead by your wife who tells you that your name is Henry. Five minutes later, you’re being shot at, your wife has been kidnapped, and you should probably go get her back. You’re also in an unfamiliar city of Moscow, and everyone wants you dead. If you can survive the insanity and solve the mystery, you might just discover your purpose and the truth behind your identity. A groundbreaking wild ride of an action film that’s unlike anything you’ve seen before — it makes you the title hero. Vitals: Director: Ilya Naishuller. Stars: Sharlto Copley, Danila Kozlovsky, Haley Bennett, Andrey Dementyev, Aha Charusha, Sveta Ustinova, Tim Roth. 2016, CC, MPAA rating: R, 97 min., Action, Box office gross: $9.244 million, Universal. Extras: Deleted scenes, “Fan Chat”: Director Ilya Naishuller and star Sharlto Copley answer fan questions about how “Hardcore Henry” was made, feature commentary with director-producer Ilya Naishuller and star-executive producer Sharlto Copley.