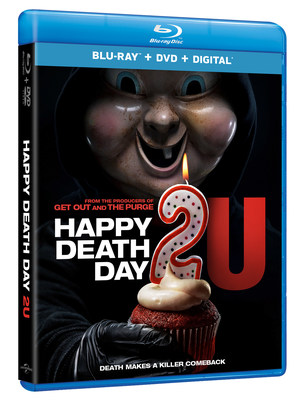 Death has rarely felt more alive than in HAPPY DEATH DAY 2U, the devilishly inventive, genre-bending follow-up to Blumhouse’s hit thriller Happy Death Day. Full of riveting, repeating twists and comedic turns, our hero Tree Gelbman (Jessica Rothe) discovers that dying over and over to find her killer was nothing compared to the surprising dangers that lie ahead. HAPPY DEATH DAY 2U arrives on Digital and via the digital movie app MOVIES ANYWHERE on April 30, 2019 and on Blu-Ray™, DVD, and On Demand May 14, 2019 from Universal Pictures Home Entertainment. Hailed as “a supercharged thrill ride” and “even more fun than the original” (Mike Reyes, CinemaBlend), the Blu-ray™, DVD and Digital versions continue the suspense with exclusive unrated bonus content including a gag reel, deleted scene and more!

It’s déjà vu all over again for Tree Gelbman (Rothe), the snarky sorority sister who solved her own murder by repeatedly reliving her death. When the masked campus killer mysteriously returns to terrorize new targets, Tree cycles through another time-loop of clever chills and slick suspense in Happy Death Day 2U. The highly entertaining follow-up welcomes the return of Happy Death Day director Christopher Landon (Paranormal Activity: The Marked Ones), producer Jason Blum (Get Out, The Purge) and stars Rothe (La La Land), Israel Broussard (Fear of the Walking Dead) and Ruby Modine (TV’s “Shameless”). Happy Death Day 2U will keep audiences guessing over and over.

HAPPY DEATH DAY 2U will be available on Blu-rayTM, DVD and Digital.