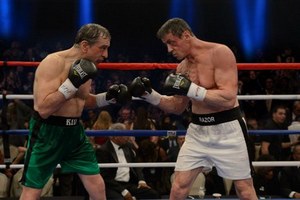 Billy “The Kid” McDonnen (Robert De Niro) and Henry “Razor” Sharp (Sylvester Stallone) are two local Pittsburgh fighters whose fierce rivalry put them in the national spotlight. Each had scored a victory against the other during their heyday, but in 1983, on the eve of their decisive third match, Razor suddenly announced his retirement, refusing to explain why but effectively delivering a knock-out punch to both their careers. Thirty years later, boxing promoter Dante Slate Jr., seeing big dollar signs, makes them an offer they can’t refuse: to re-enter the ring and settle the score once and for all. But they may not have to wait that long: on their first encounter in decades, their long-festering feud erupts into an unintentionally hilarious melee that instantly goes viral. The sudden social media frenzy transforms their local grudge match into a must-see HBO event. Now, if they can just survive the training, they may actually live to fight again. Extras: Deleted scenes. Blu-ray adds “The Bull & The Stallion,” “In the Ring With Kevin Hart,” “Ringside With Tyson & Holyfield,” “Blow for Blow With Larry Holmes,” “Kevin Hart Unedited,” alternate opening, alternate endings with an introduction by Peter Segal. Vitals: Director: Peter Segal. Stars: Robert De Niro, Sylvester Stallone, Kevin Hart, Alan Arkin, Kim Basinger. 2014, CC, MPAA rating: PG-13, 113 min., Comedy, Box office gross: $29.342 million, Warner.