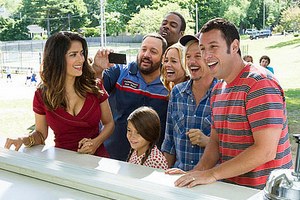 After reuniting with his high school classmates three summers before (in 2010’s “Grown Ups”), Lenny (Adam Sandler), decides he wants to move his family back to his hometown and have them grow up with his gang of childhood friends and their kids. But his idyllic life is punctuated by the same craziness he thought he left behind: old bullies, new bullies, schizophrenic bus drivers, drunk cops on skis, psycho grade school girlfriends and a group of rowdy local college kids. Extras: Eight deleted scenes, “Shaq and Dante: Police Force” featurette. Blu-ray adds three featurettes: “Look Who Stopped By” look at the cameos throughout the film, “Mr. Spade’s Wild Ride” with Spade as he prepares to be rolled down the hill in a tire, and “The Feder House” look at the construction of the sound stage where the Feder house was built. Vitals: Director:. Stars: Adam Sandler, Kevin James, Chris Rock, David Spade, Salma Hayek, Maya Rudolph, Maria Bello, Shaquille O’Neal, Nick Swardson, Alexander Ludwig, Milo Ventimglia. 2013, CC, MPAA rating: PG-13, 101 min., Comedy, Box office gross: $130.188 million, Sony.