“A timely chronicle of the plight of the U.S. Postal Service that provides an exceptional inside perspective on the challenges the nation’s postal workers face every day.” – Christopher Shaw, Author of Preserving The People’s Post Office 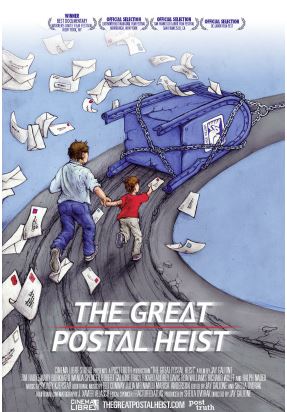 Cinema Libre Studio is thrilled to announce the release of ‘The Great Postal Heist’ coming to DVD and VOD on January 25, 2021. The feature length documentary is a first feature for Jay Galione, the son of a postal clerk, who investigated the dark corners of the United States Postal Service (USPS) and reveals how Congressional interference has created a toxic and chaotic workplace. It recently won “Best Documentary” at the Workers United Film Festival.

Established by the U.S. Constitution, the once-venerated agency has been systematically dismantled as a result of the privatization of the trillion-dollar mail industry by lobbyists and politicians who seek to make profits at the disposal of the mental health, living wages, and working conditions of their employees. A moving

indictment of the toxic culture and push to downsize, the eye-opening documentary chronicles the journey of postal workers, with insights from experts including consumer advocate Ralph Nader and economist Richard Wolff.

Workers are routinely fired, suspended, held out, starved as a disciplinary tool on the part of the management. Most working-class people can’t sustain a single paycheck, much less waiting for months for a grievance to be heard by an arbitrator or a panel… After the privatization of postal in presorting and sorting processes, they leave the delivery payment to the public and let the customers pay the most.” – Robert Hickey, Professor of Industrial Labor Relations, Queens University

“In this postal culture, you’re the enemy if you speak up… The USPS also manipulate and fabricate the actual number in order to make big money.” – Mary Burkhard, former USPS Sales Manager

‘The Great Postal Heist’ leads with the personal story Galione’s father, a 30-year postal clerk who was harassed, threatened, and fired for standing up for fellow employees. “In July of 2020, postal workers were prevented from working overtime and making late and any extra trips, even though the people depend on them for deliveries of medicines and mail-in ballots,” said Galione. “Although the active dismantling of equipment and assets, which accelerated under Postmaster General Louis Dejoy’s leadership, was temporarily halted before the election, he made it clear that the controlled demolition will resume after November 2020.”

It is broadly known that current Postmaster General Louis DeJoy, appointed by Donald Trump, has significant conflicts of interest because of his and his family’s investments in a number of companies closely tied to the U.S. Postal Service. In March 2021, DeJoy unveiled the largest rollback of consumer mail services in a generation, part of a 10-year plan that includes longer first-class delivery windows, reduced post office hours and higher postage prices.

A recent exposé by the Center for Public Integrity revealed that carriers are reporting that the overtime isn’t reflected in their checks as is explained in the documentary. In fact, thousands of managers have been caught illegally changing timecards due to pressure from their superiors to reduce the budget. This wage theft is pushing postal employees to quit, leaving the USPS more strapped than ever before. With the holidays in full swing, the Center for Public Integrity reports that many mail carriers worry about receiving overtime for holi day hours.

The Great Postal Heist is directed and produced by Jay Galione, a graduate of NYU Tisch School of the Arts who pursued his film career in Los Angeles before relocating to the Hudson Valley, New York where he serves as Senior Video Producer for Omega Institute for Holistic Studies. Jay was the editor of the feature film MI AMERICA for HBO and has produced and edited documentary content for other television networks including ABC, FOX, ION, and BRAVO.

The film is produced and edited by Sheila Dvorak of Post Truth media, a musician, filmmaker, and activist. Her film credits include independent feature films CHILDREN OF INVENTION and ARMLESS which premiered at the Sundance film Festival, and the documentary SEE WHAT I’M SAYING: THE DEAF ENTERTAINERS which premiered at the Egyptian Theater in Los Angeles and screened in theaters nationwide. Her band Sheila Dee and the Dazzlers released their first album, “Has to be Real”, in 2019, and the song “Happening” appears in the credits of THE GREAT POSTAL HEIST, calling on the American public to rise up and take part.

‘The Great Postal Heist’ has a running time of 96 minutes, is not rated and is heading to DVD and VOD (Vimeo) on January 25, 2022 with additional platforms to follow (Google, Apple, Vudu, Tubi).

The Great Postal Heist follows director Jay Galione’s father, a 30-year US Post Office clerk, who was harassed, threatened, and fired for standing up for his colleagues. A moving indictment of the toxic culture and push to downsize, the documentary chronicles the journey of postal workers, experts, and advocates who experienced firsthand the abuses in the oldest federal agency in America and stood up against the USPS’s notoriously violent work environment, featuring interviews with Ralph Nader and Richard Wolff. The atmosphere was a result of systematic dismantling and privatization of the trillion-dollar mail industry by lobbyists and politicians who seek to make profits at the expense of the mental health, living wages, and working conditions of their employees.