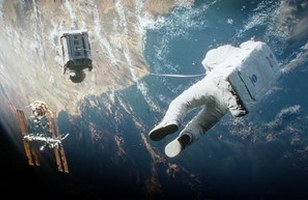 Despite its impressive boxoffice take (past the $250 million mark in the U.S.) and its technical wizardry, Alfonso Cuaron’s tale of a medical engineer (Sandra Bullock) on her first shuttle mission who is stranded alone in the emptiness of space after her ship is destroyed is really a slight piece of work. Yes, the special effects are breathtaking — and the 3D stupendous (I can’t remember the last time I dodged objects coming off the screen — must have been during “It Came From Outer Space”) and I certainly feared for Bullock’s life as she tried to figure out a way to return to the Earth. But there’s no depth here, no greater backdrop for the characters, no context, no morals to be made, no social issues to be explored (subtexts that are the hallmark of all great science fiction). It’s “All Is Lost” set in outer space, a gripping, exciting, scary and nerve shattering tale. But it’s still a video game for the big screen: Fun while it lasts … but afterwards, there’s nothing to take home. If “Gravity” had appeared in print before it made it’s way to the big screen, it would have appeared as a short story — there’s not enough substance here to sustain anything more. Co-stars George Clooney as a doomed astronaut. Extras: “Collision Point: The Race to Clean Up Space” (narrated by Ed Harris), “Aningaaq” short film by Jonas Cuaron (“Gravity’s” co-writer), “Gravity Mission Control,” shot breakdowns, “Gravity: Silent Space Version,” “Sandra’s Surprise!” Vitals: Director: Alfonso Cuaron. Stars: Sandra Bullock, George Clooney, Ed Harris (voice). 2013, CC, MPAA rating: PG-13, 91 min., Drama, Box office gross: $251.486 million, Warner.