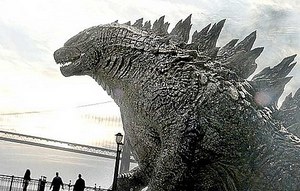 “Godzilla” makes a spectacular return in this reimagining of the original, 1954 Japanese “Gojira,” which had the gigantic sea reptile awakened and empowered by nuclear radiation and embarking on a destructive binge, destroying Tokyo and the surrounding countryside. While the original was clearly a metaphorical comment on the nuclear bombings of Hiroshima and Nagasaki as well as continued nuclear testing around the world, subsequent “Godzilla” films took away the symbolism and had Godzilla as either a monster to be reckoned with or a savior of mankind as it fought off a host of otherworldly creatures such as King Ghidorah, Gigan and Mechagodzilla. Director Gareth Edwards takes Godzilla back to its roots as a prehistoric creature reawakened by nuclear radiation in the 1950s; the “nuclear testing” of that decade was really an excuse to try to destroy the creature, who went into hibernation for some 60 years … until now. In a great environmentally-aware plot line, a pair of M.U.T.O.s, moth-like Massive Unidentified Terrestrial Organisms, come to life courtesy of a nuclear powerplant in Japan, and threaten to destroy the world by sucking away all the earth’s energy and resources in a campaign of destruction. Because nature corrects itself, Godzilla reappears to fight off the M.U.T.O.s and restore balance to the planet. Pretty cool. The special effects are spectacular, the acting topnotch (Aaron Taylor-Johnson, Ken Watanabe, Elizabeth Olsen, Juliette Binoche, Sally Hawkins, David Strathairn, Bryan Cranston) and the twists and turns exciting. You can have all your super hero cartoon characters; I’ll take a 350-foot-tall avenger any day. Extras: “Monarch: Declassified” uncovers explosive new evidence not contained in the film that unravels the massive 50-year cover-up to keep Godzilla’s existence a secret (Operation: Lucky Dragon, MONARCH: The M.U.T.O. File, The Godzilla Revelation); “The Legendary Godzilla” behind the scenes featurettes: “Godzilla: Force of Nature,” “A Whole New Level of Destruction,” “Into the Void: The H.A.L.O. Jump” and “Ancient Enemy: The M.U.T.O.s.” Vitals: Director: Gareth Edwards. Stars: Aaron Taylor-Johnson, Ken Watanabe, Elizabeth Olsen, Juliette Binoche, Sally Hawkins, David Strathairn, Bryan Cranston. 2014, CC, MPAA rating: PG-13, 123 min., Sci-Fi Action, Box office gross: $198.355 million, Warner.