The Japanese Horror-Comedy from Director Paul Young (“Flashback”) Arrives On Demand on July 13 from Indican Pictures
“A wicked and surprising splatter.”
– Terror Weekend 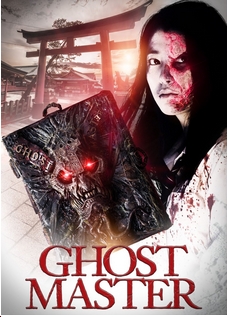 Synopsis
Ghost Master (originally titled Gôsuto masutâ) is a Japanese horror-comedy that follows Akira Kurosawa (Takahiro Miura, Attack on Titan Part 1), a nerdy assistant director working on the set of a low budget rom-com at an abandoned school. Burnt out on campy teen dramas, Akira dreams of becoming the ultimate horror master. When a conflict with the director, Atsushi Suzuki (Shin’ichi Shinohara, Pokémon the Movie: Hoopa and the Clash of Ages) causes half the cast to strike, Akira is left in charge of the production. Ditching the scheduled project and pivoting to his own horror script, titled Ghost Master, Akira is shocked when his evil screenplay comes to life and begins possessing the cast, including the film’s star, Yuya (Mizuki Itagaki, First Love Loss Time). As a killing spree commences and the body count rises, Akira must band together with the crew and one remaining actress, Mana (Riko Narumi, How to Become Myself) to stop the gruesome attacks.