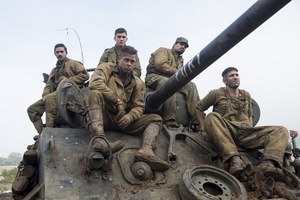 “Fury” is a post-modern war film (meaning no heroes, lots of realistic special effects blood and guts, and an existential storyline) that revolves around the crew of a Sherman tank in April, 1945, as the Allies make their final push into Germany to help win the war. Tasked with holding a vital crossroads that serves as a supply path for the invading armies, the crew of Fury and three other tanks set out behind Nazi lines to protect the territory, setting things up for a fierce artillery battle between the out-gunned U.S. tanks and a superior German Tiger tank. It’s a typical male-bonding film (Logan Berman plays a fresh recruit who has to prove himself to the other members of the tank crew, Shia LaBeouf, Jon Bernthal and Michael Pena, led by Brad Pitt). This group of men has to be the least likeable gathering of grunts in recent memory, making it hard to root for the good guys.Vitals: Director: David Ayer. Stars: Brad Pitt, Shia LaBeouf, Logan Lerman, Jon Bernthal, Michael Pena, Jason Isaacs, Scott Eastwood, Brad William Henke, Jim Parrack, Xavier Samuel. 2014, CC, MPAA rating: R, 134 min., Action Drama, Box office gross: $83.580 million, Sony. Extras: “Blood Brothers” featurette. Blu-ray adds More than 50 minutes of deleted & extended scenes; photo gallery; three featurettes: “Director’s Combat Journal,” “Armored Warriors: The Real Men Inside the Shermans” and “Taming the Beast: How to Drive, Fire, & Shoot Inside a 30-Ton Tank.”