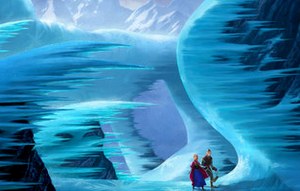 Disney’s 53rd animated feature is a reworking of Hans Christian Andersen’s fairy tale “The Snow Queen,” here about a young princess cursed with the magical ability to create ice and snow but who can’t control her powers, jeopardizing her younger sister as well as her entire kingdom. When she “freezes” the land of Arendelle and runs away to hide in the mountains, her younger sister, accompanied by a thrill-seeking mountain man, take of on a journey to return her to the castle and undo the icy damage. It’s by far Disney’s best non-Pixar animated film in ages, harking back to the story depth of “The Lion King” and “Beauty and the Beast” (in fact, it shares many of the same motifs with “Beast”: a handsome bad guy, clumsy slapstick scenes, a surprise hero, anthropomorphic characters, and lively, bouncing songs (“Frozen” won Best Original Song for “Let It Go”). The animation is rich, the story line fast, the music catchy, the sentiment of “love and righteousness will conquer all” just perfect for younger viewers and just sentimental enough for old codgers like me (I shed a tear at the happy ending). No surprise that “Frozen” won the Oscar for Best Animated Film and will sell like crazy on DVD and Blu-ray. Extras: Deleted scenes; original theatrical short: “Get A Horse”; “Let It Go” music videos by Demi Lovato, Martina Stoessel & Marsha Milan Londoh; “Frozen” teaser trailer. Blu-ray adds “The Making”; “Breaking the Ice — The Real Making of Frozen.” Vitals: Director: Chris Buck and Jennifer Lee. Stars: Voices of Kristen Bell, Idina Menzel, Jonathan Groff, Josh Gad, Santino Fontana, Alan Tudyk, Ciaran Hinds, Chris Williams. 2013, CC, MPAA rating: PG, 102 min., Animated, Box office gross: $388.736 million, Disney.