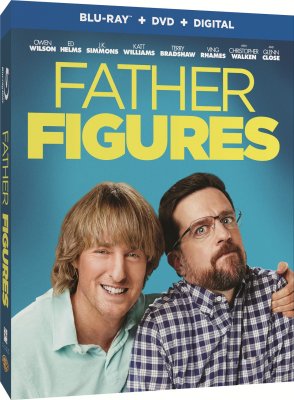 In the Alcon Entertainment comedy “Father Figures,” Owen Wilson (“The Grand Budapest Hotel,” “Wedding Crashers”) and Ed Helms (“The Hangover” films, “We’re the Millers”) star as fraternal twins Kyle and Peter who accidentally discover they’ve been living with a lie all their lives.

Fans can also own “Father Figures” via purchase from digital retailers beginning March 20.

Fraternal twins Kyle and Peter accidentally discover they’ve been living with a lie all their lives. The kindly man in the photo on their mantle isn’t their father after all, but an invention their mother (Glenn Close) concocted to conceal the truth: that she actually doesn’t know who their real father is. See, it was the seventies, and things were crazy, and…well, you know.

Armed with only a handful of clues, the brothers resolve to find the mystery man in what results in a wild road trip of discovery and revelations—about their mother, themselves and each other.

On March 20, “Father Figures” will be available in high definition and standard definition on favorite devices from select digital retailers including Amazon, FandangoNow, iTunes, PlayStation, Vudu, Xbox and others. On April 3, “Father Figures” will be made available digitally on Video On Demand services from cable and satellite providers, and on select gaming consoles.

Rating: Rated R for language and sexual references throughout