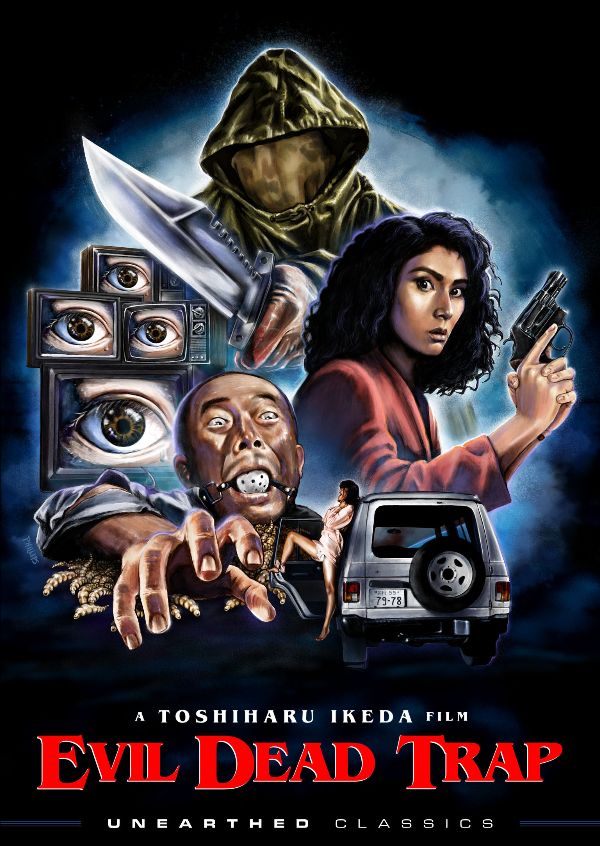 A TV station employee takes a camera crew out to an abandoned factory to investigate a purported snuff film that was made there, only to end up running for her life.

“Put yourself in the shoes of Japanese late night-talk show host Nami: You receive a mysterious VHS in the mail. When you pop it in and press PLAY, you are shocked to see what appears to be a genuine snuff film; Before your eyes in living video color, a helpless woman is brutally tortured and murdered. Now, what would you do if confronted with the possibility of a snuff videographer sending you mementoes in the mail? Would you (A): Immediately alert the police? Or (B): Gather a group of your TV station coworkers to trace the source of the tape, regardless of the obvious possibility of danger? Well, luckily for us, Nami chose option B, and “Evil Dead Trap” (1988) is a roller-coaster nightmare ride!”  – 80’s Horror Movies

“Evil Dead Trap is a slasher film with imagination. Before any of the Saw films were even a thought in the minds of James Wan and Leigh Whannell and the filmmakers to continue the series after them, Toshiharu Ikeda and writer, Takashi Ishii, were thinking up creative ways to trap and kill their victims.” – Repulsive Reviews

“Right from the start, it’s obvious that director Toshiharu Ikeda was heavily influenced by the films of Argento, Fulci, Raimi and the early body horror of Cronenberg. Anyone who has seen their films will know what to expect: sadistic imagery, wild camerawork, and a killer that spouts meaningless existentialisms.” – Eastern Kicks