Academy Award®-winning filmmaker Michael Moore announced today that he is releasing a brand new documentary film on his RUMBLE Media label – and is offering it as a gift, free of charge, in the midst of the global pandemic.

On Tuesday, April 21st, beginning at 9:00 am EDT, Planet of the Humans, directed by filmmaker and environmentalist Jeff Gibbs and executive produced by Michael Moore, will make its world premiere on Michael Moore’s YouTube channel at YouTube.com/MMFlint (click here for direct link to the full film: https://youtu.be/Zk11vI-7czE). Moore is scheduled to be the main guest on CBS’s The Late Show with Stephen Colbert on Tuesday night to make his first appearance for the film.

There will be a live event Wednesday evening, April 22nd at 10:00 pm EDT / 7:00 pm PDT featuring a live discussion and Q&A with Moore & Gibbs and viewers from around the world across YouTube, Facebook and Twitter. 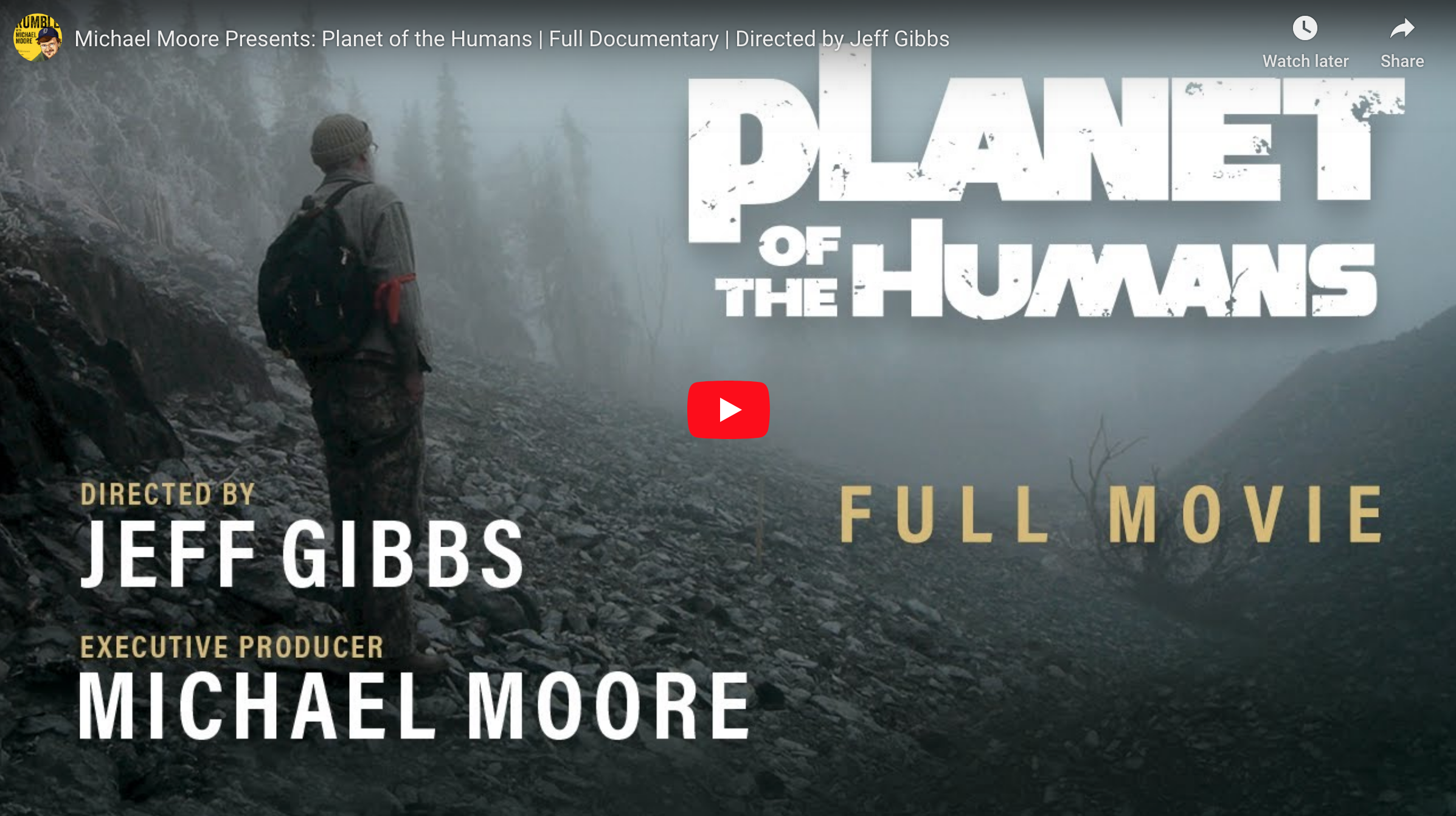 Released on the eve of the 50th anniversary of Earth Day and in the midst of the global Covid-19 pandemic, Planet of the Humans takes a harsh look at how the environmental movement has lost the battle through well-meaning but disastrous choices, including the belief that solar panels and windmills would save us, and by giving in to the corporate interests of Wall Street.

The film is the debut movie from Jeff Gibbs, whom Moore calls “a brave and brilliant filmmaker whose new voice must be heard.” Gibbs is a lifelong environmentalist and longtime collaborator of Moore’s with whom he co-produced Bowling for Columbine and Fahrenheit 9/11. Planet of the Humans first screened as a work in progress at the most recent Traverse City Film Festival where it was a huge audience favorite.

Moore and Gibbs decided that with the American public – and much of the world – confined to their homes and suddenly having to consider the role humans and their behavior have played in our fragile ecosystems, the moment was too urgent to wait until later this year for the film’s planned release.

“We have ignored the warnings, and instead all sorts of so-called leaders have steered us away from the real solutions that might save us,” says Moore, who holds the all-time box office record for documentaries. “This movie takes no prisoners and exposes the truth about how we have been led astray in the fight to save the planet, to the point where if we don’t reverse course right now, events like the current pandemic will become numerous, devastating and insurmountable. The feel-good experience of this movie is that we actually have the smarts and the will to not let this happen – but only if we immediately launch a new environmental uprising.”

Jeff Gibbs, the writer/producer/director of Planet of the Humans, has dared to say what no one will – that “we are losing the battle to stop climate change because we are following environmental leaders, many of whom are well-intentioned, but who’ve sold out the green movement to wealthy interests and corporate America.” This film is the wake-up call to the reality which we are afraid to face: that in the midst of a human-caused extinction event, the so-called “environmental movement’s” answer is to push for techno-fixes and band-aids. “It’s too little, too late,” says Gibbs. “Removed from the debate is the only thing that might save us: getting a grip on our out-of-control human presence and consumption. Why is this not the issue? Because that would be bad for profits, bad for business.”

“Have we environmentalists fallen for illusions, ‘green’ illusions, that are anything but green, because we’re scared that this is the end — and we’ve pinned all our hopes on things like solar panels and wind turbines? No amount of batteries are going to save us, and that is the urgent warning of this film.”

This compelling, must-see movie – a full-frontal assault on our sacred cows – is guaranteed to generate anger, debate, and, hopefully, a willingness to see our survival in a new way—before it’s too late.

Planet of the Humans, which will be available for free on YouTube for the next 30 days, becomes the first documentary project to be released under the Rumble Media banner, and represents Rumble’s first venture with YouTube. Rumble Media launched in December of 2019 with the podcast, “RUMBLE with Michael Moore.” The podcast has now amassed more than 9 million downloads in its first four months.

More information about the film is available at www.planetofthehumans.com.