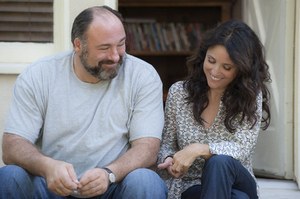 Nicole Holofcener is the best director you’ve never heard of. Her forte is quiet, small romantic comedies that revolve around women struggling to find themselves in the world — weak and strong women who stand up to the world as women and not as appendages to men. She’s cut her directing chops on TV’s “Sex and the City,” the “Gilmore Girls,” “Six Feet Under” and “Bored to Death,” and has helmed two very quirky features films — “Friends With Money” and “Please Give” — before hitting her stride with this delightfully honest and real comedy. Julia Louis-Dreyfus stars as Eva, a divorced and single parent who works as a masseuse and meets and falls for a TV museum curator named Albert (James Gandolfini) who, unknown to Eva, is the ex-husband of one of Eva’s clients, Marianne (Catherine Keener), a beautiful poet who incessantly complains about her ex-husband. The unfolding of the characters and the romance at the center of the film is handled so delicately — and with such generous humor — that you just give yourself effortlessly to the scenario — hoping for the best but bracing yourself for the worst. Everyone here deserves high praise — in particular Louis-Dreyfus — but don’t expect the Academy to come knocking. Highly recommended. Blu-ray extras: “Second Takes.” Vitals: Director: Nicole Holofcener. Stars: Julia Louis-Dreyfus, James Gandolfini, Catherine Keener, Toni Collette, Ben Falcone. 2013, CC, MPAA rating: PG-13, 93 min., Comedy, Box office gross: $14.809, million, Fox.