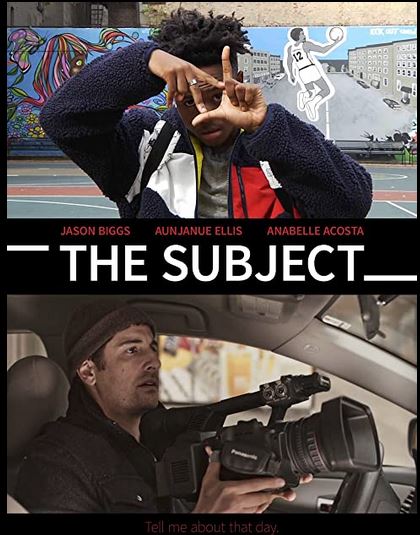 Gravitas Ventures, a Red Arrow Studios company, has acquired worldwide rights to director/producer Lanie Zipoy’s (“17 Things I Wish I Could Tell You Since You Died,” “Kid Sister”) gripping and impactful feature film directorial debut “The Subject,” which will be released theatrically in more than 10 markets beginning with  Los Angeles, New York, Boston, Seattle and Detroit, among many more, and across  TVOD/Digital platforms throughout North America – all beginning on October 22, 2021. Myriad Pictures handles the International sales rights. Zipoy’s “The Subject” follows a successful white documentary filmmaker dealing with the fallout from his previous film which caught the murder of a Black teen on tape.

“The Subject” is a riveting performance driven tour de force starring Jason Biggs (“Orange is the New Black,” and “American Pie”), Aunjanue Ellis (“If Beale Street Could Talk,” and Emmy nominee for “Lovecraft Country”), Anabelle Acosta (“Quantico,” “Ballers”), joining them in this nuanced layered drama are Carra Patterson (“Straight Outta Compton,” and Disney Plus’ “Turner & Hooch”), Nile Bullock (“Ray Donovan,” “Bull”), and Caleb Eberhardt (“Judas and the Black Messiah,” “The Post”). “The Subject” is America today. America 2020. America 2014. America 1992. America 1968. America 1919. America 1865. America 1619. Chisa Hutchinson’s (upcoming: Showtime’s “Three Women” and Hulu’s “Tell Me Lies” ) incisive layered screenplay was written in 2010 and finds its way in the world at a time when the themes it unpacks – Black Lives Matter, interrogation of white saviorhood and white supremacy, and the ethics/responsibilities of artists – are pivotally central to conversations and protests around the United States. “The Subject” adds to those conversations and will encourage thoughtful debate around these issues at a time when thoughtful debate is most needed.

Phil Waterhouse (Jason Biggs) is a successful documentary filmmaker with a thriving career, brilliant girlfriend and a lovely suburban home. His last film – The Price of Brotherhood – was a rousing critical and commercial success. During its making, though, baby-faced Harlem teenager Malcolm was murdered. Now, journalists, who once lauded him, hound Phil about his role in Malcolm’s death, and he is haunted by fears he could have prevented it. While working on his latest project, someone films his every move. With the tables turned, Phil is unnerved being the subject of someone else’s movie. As his world collapses around him, he preps for a showdown with the person who threatens all that he holds dear.

“The Subject” is shot on four different cameras – one for the documentary about Malcolm, one for Phil’s new documentary footage, the narrative camera and a consumer camera that is used to record Phil. Each camera offers a different viewpoint on the world, coalescing into a film that asks us how exactly we belong to each other in this fractured world.