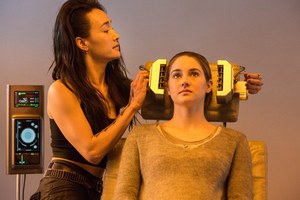 All hail Lionsgate. First the company gave us “The Hunger Games,” parlaying Suzanne Collins’ novels into multi-million dollar boxoffice bonanzas. Now they’ve handed us “Divergent,” the first movie in a four-part saga based on the “Divergent” book series by Veronica Roth. Like “The Hunger Games,” “Divergent” stars an up-and-coming young actress who’s just starting to make her mark as a dramatic star in Hollywood; in this case it’s Shailene Woodley, who got excellent notices for her work in 2011’s “The Descendants” and 2013’s “The Spectacular Now” and this years’s “The Fault in Our Stars” (need we remind you that Jennifer Lawrence knocked people out in 2010’s “Winter’s Bone” well before “The Hunger Games”?). But the similarity stops there. While “Games” Katniss Everdeen is a self-confident warrior going up against the system, in “Divergent” — which postulates a dystopian future in which society is divided into five factions that each represent a different virtue — Tris Prior (Woodley) is basically a naif who, when tested to determine which group she should enter, discovers she doesn’t fit into any group — she’s a Divergent. Lacking confidence, she decides to join the militant Dauntless faction (the futuristic police force), where she develops her inner and outer strength, uncovers a mind-bending conspiracy, and finds the courage to foster a mini-rebellion. Unlike “Hunger,” “Divergent” kind of ambles along at a slower pace, taking a bit too long to develop its backstory before getting to the meat of the matter: a government takeover by a totalitarian group (course, this futuristic society isn’t too sweet to begin with). And, unlike Lawrence fitting perfectly into Katniss’ role, we found Woodley a little too tenuous as Tris; she’s too hesitant in accepting her role. (Audiences, too, were hesitant; “Divergent” pulled in about $150 million compared to the first “Games'” $400 mil.) Still, it’s a fun outing, with enough action, romance and intrigue to make you want to see the next installments (The next three installments — “Insurgent” and “Allegiant Parts 1 & 2” — will be released theatrically on March 20, 2015, March 18, 2016 and March 24, 2017, respectively). Extras: Deleted scenes, commentary with director Neil Burger, commentary with producers Douglas Wick and Lucy Fisher. Blu-ray adds “Bringing Divergent to Life” documentary, “Faction Before Blood” featurette. Vitals: Director: Neil Burger. Stars: Shailene Woodley, Theo James, Ashley Judd, Jai Courtney, Ray Stevenson, Zo Kravitz, Miles Teller, Tony Goldwyn, Ansel Elgort, Maggie Q, Mekhi Phifer, Kate Winslet. 2014, CC, MPAA rating: PG-13, 139 min., Sci-Fi-Action-Romance, Box office gross: $150.544 million, Lionsgate.