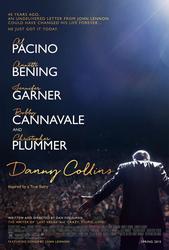 Inspired by a true story, Al Pacino stars as aging 1970s rocker Danny Collins, who can’t give up his hard-living ways. But when his manager (Christopher Plummer) uncovers a 40 year-old undelivered letter written to him by John Lennon urging him to stay true to his heart, Danny embarks on a quest to try to rediscover his family, his talent and the love he abandoned on his way to success. Vitals: Director: Dan Fogelman. Stars: Al Pacino, Annette Bening, Christopher Plummer, Jennifer Garner, Michael Caine, Melissa Benoist, Josh Peck, Bobby Cannavale. 2015, CC, MPAA rating: R, 108 min., Comedy-Drama, Box office gross: $5.143 million, Universal. Extras: “Behind the Scenes of Danny Collins,” “Danny Collins — Album Covers Through the Years.”