In a city on edge, a moment of violence starts a war in Enforcement. The “high-octane” (Los Angeles Times) thriller and debut film from Danish co-writers and co-directors Anders Ølholm (Letters for Amina) and Frederik Louis Hviid (“Follow the Money”) arrives on DVD and On Demand on June 15 from Magnolia Home Entertainment under the Magnet Label. 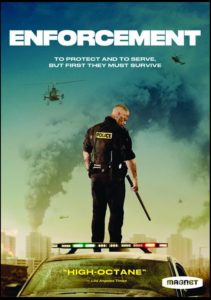 Enforcement follows Mike (Jacob Lohmann, A Royal Affair) and Jens (Simon Sears, “Shadow and Bone”), two Danish police officers on routine patrol. When unrest spreads following the death of a Muslim suspect while in police custody, the two officers find themselves trapped in a maze of buildings within a city torn by the loss and fueled by anger. Unwelcome and at risk during violent riots, the officers must manage without police reinforcement and make their way out alive.
Official Selection of the 2020 Venice Critics’ Week, Enforcement will be available on DVD and On Demand via Apple TV, Google Play, Prime Video, FandangoNOW and more on June 15.
Posted by OnVideo on June 6, 2021  Add comments