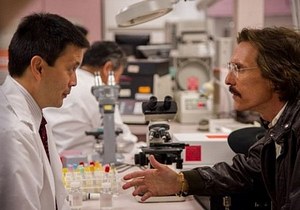 There’s a pair of outstanding performances in director Jean-Marc Vallee’s (“The Young Victoria”) thoroughly involving “Dallas Buyers Club”: One by Matthew McConaughey, who plays real-life Texas electrician Ron Woodroof, a bull-riding he-man diagnosed HIV-positive in 1985 and given 30 days to live; the other by Jared Leto as Rayon, a transgender AIDS-stricken activist who becomes friends with Woodroof and helps him to accept his plight and the plight of other HIV-infected people — people Woodroof shunned. Because the U.S. government refused to approve medicines that were proven to help hold back AIDS-related illnesses, Woodroof tracked down alternative treatments from all over the world by means both legal and illegal, setting up a Dallas Buyers Club that fellow HIV-positive people could join to get access to needed supplies. As in any film pitting a maverick against the establishment and powers that be, the bad guys (here thick-headed FDA agents, conservative doctors, government lackeys) are exaggerated so you can root for the underdogs (Woodroof and an unlikely band of renegades and outcasts). Woodroof’s crusade had as much to do with money and orneriness as it did for any moral imperative, but his unlikely (and unlikable) character becomes a hero at the film’s endExtras: Deleted scenes, “A Look Inside Dallas Buyers Club.” Vitals: Director: Jean-Marc Vallee. Stars: Matthew McConaughey, Jennifer Garner, Jared Leto, Steve Zahn, Dallas Roberts, Kevin Rankin, Denis O’Hare, Jane McNeill, Griffin Dunne. 2013, CC, MPAA rating: R, 117 min., Drama, Box office gross: $14.257 million, Universal.