This July, Byron Haskin’s genre-defining sci-fi classic The War of the Worlds, an Oscar-winning adaptation of H. G. Wells’s influential novel, will join the Criterion Collection in a new 4K restoration. One of the most acclaimed films of 2019, Noah Baumbach’s bittersweet Marriage Story will make its home-video debut in an edition featuring behind-the-scenes footage and extensive interviews with the cast and crew. The battle of the sexes takes a breezier turn in Preston Sturges’s screwball classic The Lady Eve, starring Henry Fonda and Barbara Stanwyck, which will appear on Blu-ray for the first time. Also making its Blu-ray debut is Abbas Kiarostami’s Palme d’Or-winning masterpiece Taste of Cherry, a gorgeously complex meditation on mortality. And that’s not all: our previously announced Blu-ray box set Bruce Lee: His Greatest Hits will collect five kung-fu classics starring the international martial-arts legend, along with a dizzying array of supplemental features.
July 7: The War of the Worlds
July 14: Bruce Lee: His Greatest Hits
July 14: The Lady Eve
July 21: Marriage Story
July 21: Taste of Cherry

Barbara Stanwyck sizzles, Henry Fonda bumbles, and Preston Sturges runs riot in one of the all-time great screwballs, a pitch-perfect blend of comic zing and swoonworthy romance. Aboard a cruise liner sailing up the coast of South America, Stanwyck’s conniving card sharp sets her sights on Fonda’s nerdy snake researcher, who happens to be the heir to a brewery fortune. But when the con artist falls for her mark, her grift becomes a game of hearts-and she is determined to win it all. One in a string of matchless comedic marvels that Sturges wrote, directed, and produced as part of a dazzling 1940s run, this gender-flipped battle-of-wits farce is perhaps his most emotionally satisfying work, tempering its sparkling wit with a streak of tender poignancy supplied by the sensational Stanwyck at her peak.
SPECIAL EDITION FEATURES
* New 4K digital restoration, with uncompressed monaural soundtrack on the Blu-ray
* Audio commentary from 2001 featuring film professor Marian Keane
* Introduction from 2001 by filmmaker Peter Bogdanovich
* Interview from 2020 with writer-director Preston Sturges’s biographer and son Tom Sturges and friends
* New video essay by film critic David Cairns
* Costume designs by Edith Head
* Lux Radio Theatre adaptation of the film from 1942 featuring Barbara Stanwyck and Ray Milland
* Audio recording of “Up the Amazon,” a song from an unproduced stage musical based on the film
* English subtitles for the deaf and hard of hearing
* PLUS: An essay by critic Geoffrey O’Brien and a 1946 profile of Preston Sturges from LIFE magazine
1941 * 93 minutes * Black & White * Monaural * 1.37:1 aspect ratio

A love story about divorce. A marriage coming apart and a family coming together. Marriage Story is a hilarious and harrowing, sharply observed, and deeply compassionate film from the acclaimed writer-director Noah Baumbach. Adam Driver and Scarlett Johansson deliver tour-de-force performances as Charlie, a charismatic New York theater director wedded to his work, and Nicole, an actor who is ready to change her own life. Their hopes for an amicable divorce fade as they are drawn into a system that pits them against each other and forces them to redefine their relationship and their family. Featuring bravura, finely drawn supporting turns from Alan Alda,Ray Liotta, and Laura Dern-who won an Academy Award for her performance here-as the trio of lawyers who preside over the legal battle, Marriage Story (nominated for six Academy Awards, including best picture) is a work of both intimacy and scope that ultimately invokes hope amid the ruins.
DIRECTOR-APPROVED SPECIAL EDITION FEATURES
* New 4K digital transfer, supervised by director Noah Baumbach, with 5.1 surround DTS-HD Master Audio soundtrack on the Blu-ray
* New interview with Baumbach
* The Players, a new program featuring interviews with actors Scarlett Johansson, Adam Driver, Laura Dern, Alan Alda, Julie Hagerty, and Ray Liotta
* The Filmmakers, a new program about the production of the film, featuring interviews with Baumbach, editor Jennifer Lame, production designer Jade Healy, costume designer Mark Bridges, and producer David Heyman
* The Making of “Marriage Story,” a new program featuring behind-the-scenes footage
* New interviews with composer Randy Newman and Baumbach about the film’s score
* New program featuring Baumbach walking the viewer through a key location from the film
* Trailers
* English subtitles for the deaf and hard of hearing
* PLUS: Notes on the film by novelist Linn Ullmann
2019 * 137 minutes * Color * 5.1 surround * 1.66:1 aspect ratio

The first Iranian film to win the Palme d’Or, this austere, emotionally complex drama by the great Abbas Kiarostami follows the middle-aged Mr. Badii (Homayoun Ershadi) as he drives around the hilly outskirts of Tehran looking for someone who will agree to dispose of his body after he commits suicide, a taboo under Islam. Extended conversations with three passengers (a soldier, a seminarian, and a taxidermist) elicit different views of mortality and individual choice. Operating at once as a closely observed, realistic story and a fable populated by archetypal figures, Taste of Cherry challenges the viewer to consider what often goes unexamined in everyday life.
BLU-RAY SPECIAL EDITION FEATURES
* New 4K digital restoration, with uncompressed monaural soundtrack
* Project, Abbas Kiarostami’s 39-minute 1997 sketch film for Taste of Cherry, made with the director’s son Bahman Kiarostami
* New interview with Iranian film scholar Hamid Naficy
* Rare 1997 interview with Abbas Kiarostami, conducted by Iranian film scholar Jamsheed Akrami
* Trailer
* New English subtitle translation
* PLUS: An essay by critic A. S. Hamrah
1997 * 99 minutes * Color * Monaural * In Persian with English subtitles * 1.66:1 aspect ratio
BLU-RAY EDITION

The War of the Worlds

A mysterious, meteorlike object has landed in a small California town. All clocks have stopped. A fleet of glowing green UFOs hovers menacingly over the entire globe. The Martian invasion of Earth has begun, and it seems that nothing-neither military might nor the scientific know-how of nuclear physicist Dr. Clayton Forrester (Gene Barry)-can stop it. In the expert hands of genre specialists George Pal and Byron Haskin, H. G. Wells’s end-of-civilization classic receives a chilling Cold War-era update, complete with hallucinatory Technicolor and visionary, Oscar-winning special effects. Emblazoned with iconographic images of 1950s science fiction, The War of the Worlds is both an influential triumph of visual imagination and a still-disquieting document of the wonder and terror of the atomic age.
SPECIAL EDITION FEATURES
* New 4K digital restoration, with uncompressed monaural soundtrack on the Blu-ray
* New alternate 5.1 surround soundtrack, created by sound designer Ben Burtt and presented in DTS-HD Master Audio on the Blu-ray
* Audio commentary from 2005 featuring filmmaker Joe Dante, film historian Bob Burns, and author Bill Warren
* Movie Archaeologists, a new program on the visual and sound effects in the film featuring Burtt and film historian Craig Barron
* From the Archive, a new program about the film’s restoration featuring Barron, Burtt, and Paramount Pictures archivist Andrea Kalas
* Audio interview with producer George Pal from 1970
* The Sky Is Falling, a 2005 documentary about the making of the film
* The Mercury Theatre on the Air radio adaptation of The War of the Worlds from 1938, directed and narrated by Orson Welles
* Radio program from 1940 featuring a discussion between Welles and H. G. Wells, author of the 1897 novel The War of the Worlds
* Trailer
* English subtitles for the deaf and hard of hearing
* PLUS: An essay by film critic J. Hoberman
1953 * 85 minutes * Color * Monaural * 1.37:1 aspect ratio
July 7

In the early 1970s, a kung-fu dynamo named Bruce Lee side-kicked his way onto the screen and straight into pop-culture immortality. With his magnetic screen presence, tightly coiled intensity, and superhuman martial-arts prowess, Lee was an icon who conquered both Hong Kong and Hollywood cinema, and transformed the art of the action film in the process. This collection brings together the five films that define the Lee legend: furiously exciting fist-fliers propelled by his innovative choreography, unique martial-arts philosophy, and whirlwind fighting style. Though he completed only a handful of films while at the peak of his stardom before his untimely death at age thirty-two, Lee left behind a monumental legacy as both a consummate entertainer and a supremely disciplined artist who made Hong Kong action cinema a sensation the world over. Due July 14.

Films In This Set 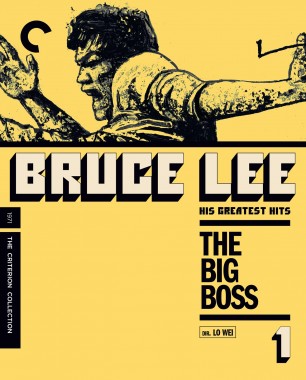 Enter a legend. Bruce Lee’s return to the Hong Kong film industry after a decade in America proved to be his big breakthrough, launching him to superstardom and setting a new standard for kung-fu heroics. In The Big Boss, he commands the screen with his gravitas and explosive physicality in the role of a Chinese immigrant working at a Thai ice factory and sworn to an oath of nonviolence. When he discovers that the factory’s ruthless higher-ups are running a secret heroin ring and offing their own workers, his commitment to pacifism is put to the test. With his undeniable charisma and fluid, lightning-fast martial-arts style, Lee is a revelation, blazing across the screen with a speed and power the likes of which had never been seen before.