Available in Theaters, on Digital, and On Demand August 13

A man suffering from cancer seeks revenge on the thieves who have destroyed his life in CRIME STORY, starring Academy Award® winners Mira Sorvino and Richard Dreyfuss, opening in select theaters and everywhere movies can be rented August 13 from Saban Films and Paramount. 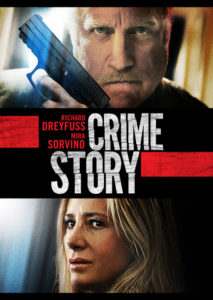 SYNOPSIS
Starring Academy Award® winners Richard Dreyfuss (The Goodbye Girl, Jaws) and Mira Sorvino (Mighty Aphrodite, Mimic). When ex-mob boss Ben Myers (Dreyfuss) is targeted in a home robbery, he goes on a deadly rampage of vengeance. But with his family caught in the cross hairs, Myers must finally face the consequences of his dark past in this action-packed crime thriller.

Written and directed by Adam Lipsiu