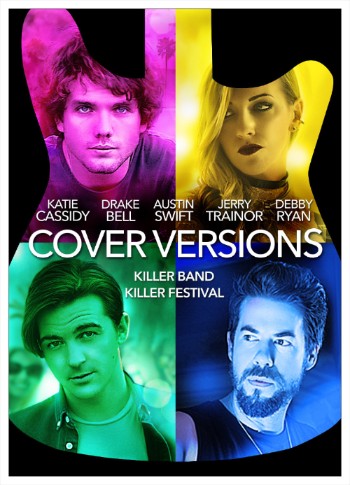 Award-winning filmmaker Todd Berger (It’s a Disaster) assembles an all-star cast for COVER VERSIONS, a murder mystery set at an indie music festival. Sex, drugs and rock ’n’ roll are all par for the course at synth-rock band Starfoxy’s house party, but when murder is added to the set list, the differing bandmates must give the greatest performance of their lives if they want to stay out of jail. Katie Cassidy (“Arrow”) and Austin Swift (Live by Night) join a host of Disney Channel and Nickelodeon stars all grown up —  Drake Bell (“Drake & Josh,” “Grandfathered”), Jerry Trainor (“iCarly”), Debby Ryan (“The Suite Life on Deck,” “Jessie”) and Ashley Argota (“True Jackson, VP,” “Bucket & Skinner’s Epic Adventures”). COVER VERSIONS debuts on digital April 10 from Sony Pictures Home Entertainment and will be premiering in Los Angeles on April 9.

Synopsis:
On the eve of their biggest gig ever, the four members of synth-rock band Starfoxy throw a rager that ends with a fan mysteriously dead in the pool.  When the police interrogate the eccentric rockers, each one recounts very different stories in this clever murder mystery.

Written and directed by Todd Berger, COVER VERSIONS was produced by Marc Reid and Mark Korshak of Lakeshore Entertainment’s Off The Dock division.

COVER VERSIONS has a run time of approximately 84 minutes and is rated R for language and drug content.