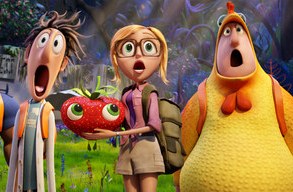 Picks up where the first film left off. Inventor Flint Lockwood’s genius is finally being recognized as he’s invited by his idol Chester V to join The Live Corp Company, where the best and brightest inventors in the world create technologies for the betterment of mankind. Chester’s right-hand-gal — and one of his greatest inventions — is Barb (a highly evolved orangutan with a human brain, who is also devious, manipulative and likes to wear lipstick). It’s always been Flint’s dream to be recognized as a great inventor, but everything changes when he discovers that his most infamous machine (which turns water into food, resulting in cheeseburger rain and spaghetti tornadoes) is still operating and is now creating food-animal hybrids — “foodimals.” With the fate of humanity in his hands, Chester sends Flint and his friends on a dangerously delicious mission, battling hungry tacodiles, shrimpanzees, apple pie-thons, double bacon cheespiders and other food creatures to save the world again. Extras: Commentary with directors Cody Cameron and Kris Pearn; Cody Simpson “La Da Dee” music video and making of the video featurette; seven new featurettes:
“Anatomy of a Foodimal”: Flamangos, Cheesespiders, Hippotatomuses! Oh my! The filmmakers discuss the inspiration behind these wacky food-animal hybrids that have taken over Swallow Falls, and chat with the gang to find out how they came up with the Food-imal’s creative and amusing names.
“Production Design: Back in the Kitchen”: Where do you go after it rains cheeseburgers all over Swallow Falls? Back to the kitchen of course! Filmmakers Cody Cameron and Kris Pearn discuss how they came up with stories and jokes for the film.
“Awesome End Credits”: The filmmakers discuss how they used a mix of 3D, 2D, stop motion and live action.
“Cloudy Cafe: Who’s On the Menu?” featurette on the voice actors.
“Building the Foodimals.”
“The Sasquash” featurette on all the places in the film that the sneaky Sasquash is hiding.
“Delicious Production Design.”
Blu-ray adds deleted scenes and four mini-movies:
“Attack of the 50-Foot Gummi Bear” in which Flint’s mischievous gummi bear grows to 50-feet by using his new food-modifying invention while Steve is in charge. Steve must frantically chase the gummi bear and transform him back to normal size before Flint returns to the lab.
“Steve’s First Bath”: Flint’s failed date with Sam is because of Steve’s mischievous ways.
“Super Manny”: Manny, the Jack of all trades, saves an adorable kitty with his many skills.
“Earl Scouts”: The Foodimals join Earl’s scouting program but are very competitive.
Vitals: Director: Cody Cameron and Kris Pearn. Stars: Voices of Bill Hader, Anna Faris, James Caan, Andy Samberg, Benjamin Bratt, Neil Patrick Harris, Kristen Schaal, Will Forte, Terry Crews. 2013, CC, MPAA rating: PG, 95 min., Animated, Box office gross: $113.016 million, Sony.