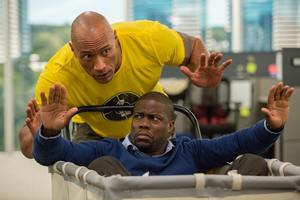 Bob Stone (Dwayne Johnson), a one-time bullied geek who grew up to be a lethal CIA agent, comes home for his high school reunion and, claiming to be on a top-secret case, enlists the help of Calvin Joyner (Kevin Hart), once the ‘big man on campus,” now an accountant, who misses his glory days.
Stone needs Calvin’s number skills to help him save the compromised U.S. spy satellite system. But before the staid numbers-cruncher realizes what he’s getting into, it’s too late to get out, as his increasingly unpredictable new friend drags him through a world of shoot-outs, double-crosses and espionage that could get them both killed in more ways than he can count. Vitals: Director: Rawson Marshall Thurber. Stars: Dwayne Johnson, Kevin Hart, Amy Ryan, Aaron Paul, Danielle Nicolet, Megan Park, Ryan Hansen, Tim Griffin. 2016, CC, MPAA rating: PG-13, 107 min., Action Comedy, Box office gross: $126.088 million, Warner. Extras: TBA.