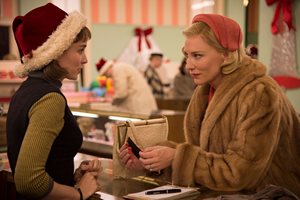 This adaptation of Patricia Highsmith’s (“The Talented Mr. Ripley,” “Strangers on a Train”) seminal novel “The Price of Salt” follows two women from very different backgrounds who find themselves in an unexpected love affair in 1950s New York. As conventional norms of the time challenge their attraction, an honest story emerges to reveal the resilience of the heart in the face of change. A young woman in her 20s, Therese Belivet (Rooney Mara), is a clerk working in a Manhattan department store and dreaming of a more fulfilling life when she meets Carol (Cate Blanchett), an alluring, older woman trapped in a loveless, convenient marriage. There’s an immediate connection between them, and the film charts the ups and downs of their relationship as they are buffeted by Carol’s indignant, abusive husband as well as by her jealous ex-lover. Brilliant acting, cinematography, lighting and editing put this film at the top of our list for best films of the year (though the Academy overlooked it for a best picture nom). Two women in love was a forbidden love in the 1950s (and maybe still, today, to the Academy), and director Todd Haynes and cinematographer Edward Lachman’s camerawork highlights the clandestine affair by shooting through gauzey curtains and clouded windows. A work of art! Vitals: Director: Todd Haynes. Stars: Rooney Mara, Cate Blanchett, Kyle Chandler, Sarah Paulson, Cory Michael Smith, Jake Lacy. 2015, CC, MPAA rating: R, 118 min., Comedy, Box office gross: $12.122 million, The Weinstein Co.