A shining gem amongst all the drek of this year’s remakes and reimaginings. Woody Allen’s latest bout of nostalgia — a witty, literate, loving, good natured and bittersweet look at life, love, dreams and aspirations — is set 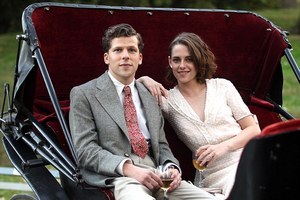 in the 1930s and follows Bronx-born Bobby Dorfman (Jesse Eisenberg), the son of a jeweler, who travels to Hollywood and gets a job as an assistant to his uncle Phil (Steve Carell), a hot-shot Hollywood talent agent. He immediately is stricken with Phil’s unpretentious secretary, Vonnie (Kristen Stewart), and while she has feelings for him, the love affair ends abruptly. Heart-broken, Bobby returns to New York, where he rejoins his colorful Bronx family, where he takes over his older, gangster brother’s night club, eventually turning it into a Cafe Society success. It’s a simple tale but Allen wrings the most out of his dialogue and screenplay, and gets wonderful performances from Eisenberg, Carell and Stewart. It’s altogether charming and vivacious — and the cinematography, by the great Vittorio Storaro — is stunning. A delightful romp for the 80-year-old director. Vitals: Director: Woody Allen. Stars: Jesse Eisenberg, Steve Carell, Kristen Stewart, Blake Lively, Jeannie Berlin, Parker Posey, Corey Stoll, Ken Stott.
2016, CC, MPAA rating: PG-13, 96 min., Romantic Comedy, Box office gross: $7.543 million, Lionsgate.
Extras: “On the Red Carpet” for the film’s premiere, photo gallery.