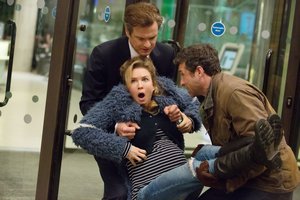 The third installment in the Bridget Jones series follows Bridget as she embraces a new decade in her life, confronts her past with a charismatic old love, and finds new romance using her signature quirk and humor. Forty-something and single again after breaking up with Mark Darcy (Colin Firth), Bridget (Renée Zellweger) decides to focus on her job and surround herself with old friends and new. But her love life takes a turn when she meets a dashing American named Jack (Patrick Dempsey), the suitor who is everything Mr. Darcy is not. In an unlikely twist, Bridget finds herself pregnant, but with one hitch: she can only be fifty percent sure of the identity of her baby’s father. Vitals: Director: Sharon Maguire. Stars: Renée Zellweger, Patrick Dempsey, Colin Firth, Jim Broadbent, Gemma Jones, Emma Thompson. 2016, CC, MPAA rating: R, 122 min., Comedy, Box office gross: $23.609 million, Universal. Extras: Alternate ending, Gag Reel, Deleted and Alternate Scenes, “Full Circle: The Making of Bridget Jones’s Baby” multi-part documentary on the making of “Bridget Jones’s Baby” featuring interviews with cast and crew including: “Renée Returns,” “The Difference that 15 Years Makes,” “Bridget’s Boys,” “In London, In Love” and “Sharon’s Show: The Director.”