Ben Stiller (Meet the Parents franchise) stars as a middle-aged, middle-class dad, on his journey of self-discovery in the genuine and quirky comedy Brad’s Status, coming to Digital on December 19, 2017 and Blu-ray™, DVD and On Demand on January 2, 2018, from Universal Pictures Home Entertainment. Plagued by feelings of inadequacy in comparison to his overly successful college friends, Brad begins to doubt his own life’s choices and contributions, as his prodigy son explores the beginnings of his own. Brad’s Status on Blu-rayTM, DVD and Digital comes packed with bonus features that include commentary from the film’s stars and filmmakers as well as special behind-the-scenes footage. 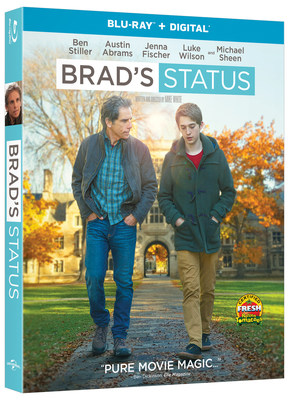 Written and directed by Mike White (School of Rock), the film also stars Jenna Fischer (“The Office”), Luke Wilson (Old School), Michael Sheen (“Masters of Sex”), Jemaine Clement (Moana) and Austin Abrams (Paper Towns). Brad’s Status is a thoughtful examination of the complexities of getting older and handling others’ perceptions of self in the modernly connected world.

Ben Stiller stars as Brad whose satisfying career, sweet wife and comfortable life in suburban Sacramento aren’t quite what he imagined during his college glory days.  When he accompanies his musical prodigy son on a university tour, he can’t help comparing his life with those of his four best college friends who seemingly have more wealthy and glamorous lives.  But when circumstances force him to reconnect with his former friends, Brad begins to question whether he has really failed or if their lives are actually more flawed than they appear.

Brad’s Status will be available on Blu-ray™, DVD and Digital.