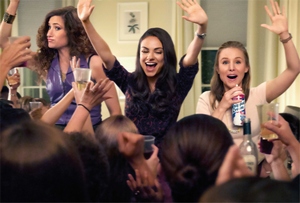 “Bad Moms” is one of the better comedies of the year, a film that doesn’t take itself, or its topic — overworked moms rebelling against the constraints of modern “helicopter” parenthood — too seriously. Instead it takes its characters and situations and pushes them to the extremes of comedic silliness. Mila Kunis takes the lead here as an over-worked, over-committed and exhausted mom who gets fed up with her philandering husband, her obnoxious boss at work, and the overzealous PTA moms at her local school and enlists two like-minded moms — the straight-laced Kristen Bell and floozy Kathryn Hahn — to join her in “bad momhood” — boozing, partying and downright nastiness. It all works out — until the trio come up against nasty PTA president Christina Applegate and her cabal of “perfect” moms. It’s kind of a post-“Bridesmaids” world of profanity, sex and self-indulgence. And though it’s all very predictable, it’s all very enjoyable. A trifle — but fun. Vitals: Director: Jon Lucas, Scott Moore. Stars: Mila Kunis, Kristen Bell, Kathryn Hahn, Jada Pinkett Smith, Christina Applegate, Emjay Anthony, Annie Mumolo, Eugenia Kuzmina, Christina DeRosa, Jay Jablonski. 2016, CC, MPAA rating: R, 100 min., Comedy, Box office gross: $63.591 million, Universal. Extras: Gag reel, deleted scenes, cast and mom interviews.