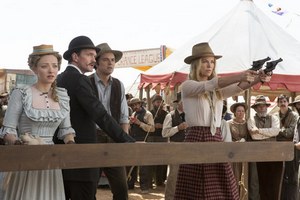 Seth MacFarlane chose this junky send-up of Western films as his follow-up to the brilliant and funny “Ted” and struck out his second time at bat: The three strikes were an insipid and boring storyline, weak acting by several of the leads, (including MacFarlane himself and Sarah Silverman), and limp direction. There’s no fun in the town of Old Stump, where MacFarlane plays sheep farmer and coward Albert Stark, whose fickle fiancee (Amanda Seyfried) dumps him for a mustachioed dandy (Neil Patrick Harris). To try to win her back, he enlists the help of Anna (Charlize Theron), a gorgeous gunslinger hiding out in the town, waiting for the return of her husband, Clinch Leatherwood (Liam Neeson), the most dangerous desperado around. There’s plenty of stale bathroom jokes transported into the Old West, a lot of stupid carnage, and an unnecessary and distastefully filthy subplot with Silverman as a saloon whore who wants to be “pure” for her betrothed boyfriend (Giovanni Ribisi). The Blu-ray includes an unrated version with 18 additional minutes. There’s a load of extras that only highlight the lackluster nature of the production, including a featurette about some of the familiar faces that pop into the town of Old Stump, including a visit from Christopher Lloyd, aka Doc Brown (who, if he was really smart, would have hopped into his “Back to the Future” DeLorean and time-traveled the hell out of this movie). Extras: Gag reel, “A Fistful of Dirt … In Your Mouth” locations featurette, commentary. Blu-ray adds alternate ending; deleted/extended/alternate scenes; “Once Upon a Time in a Different West” behind-the-scenes featurette; “The Good, the Bad and the Increasingly Decreasing Population” featurette about some of the familiar faces that pop into Old Stump, including one of the greatest cameos of them all, a visit from Christopher Lloyd aka Doc Brown; unrated commentary with director/producer/co-writer Seth MacFarlane, co-writers and executive producers Alec Sulkin & Wellesley Wild and star Chalrlize Theron. Vitals: Director: Seth MacFarlane. Stars: Charlize Theron, Liam Neeson, Neil Patrick Harris, Amanda Seyfried, Giovanni Ribisi, Sarah Silverman, Seth MacFarlane. 2014, CC, MPAA rating: R, 116 min., Comedy Western, Box office gross: $42.615 million, Universal.