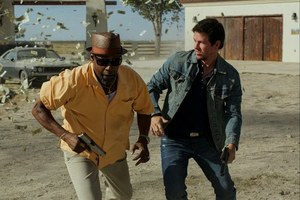 For the past 12 months, DEA agent Bobby Trench (Denzel Washington) and U.S. naval intelligence officer Marcus Stigman (Mark Wahlberg) have been reluctantly attached at the hip. Working undercover as members of a narcotics syndicate, each man distrusts his partner as much as the criminals they have both been tasked to take down. When their attempt to infiltrate a Mexican drug cartel and recover millions goes haywire, Trench and Stigman are suddenly disavowed by their superiors. Now that everyone wants them in jail or in the ground, the only person they can count on is the other. Unfortunately for their pursuers, when good guys spend years pretending to be bad, they pick up a few tricks along the way. Extras: Deleted and extended scenes, “Undercover and Into Action” featurette, commentary with director Baltasar Kormakur and producer Adam Siegel. Blu-ray adds “The Good, the Bad and the Sexy,” “Finding the Vibe,” “Living Dangerously” featurettes. Vitals: Director: Baltasar Kormakur. Stars: Denzel Washington, Mark Wahlberg, Paula Patton, Bill Paxton, Fred Ward, James Marsden, Edward James Olmos. 2013, CC, MPAA rating: R, 109 min., Action, Box office gross: $7.468 million, Universal.