A feel good tale set in the Great Depression, about a football team and their rise to fame in Texas. This true story was featured at the Tribeca Film Festival. 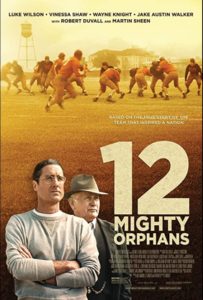 12 Mighty Orphans tells the story of a Fort Worth, Texas orphanage’s football team, called the Mighty Mites, which started during the Great Depression circa 1938. These players all had a humble start in life but went on to really excel in their sporting game. Who doesn’t love a feel-good story where the underdog comes out on top, in this case, the Texas state championships?

An orphan himself, high school football coach Rusty Russell (Luke Wilson) decides to take on the challenge of turning an orphanage football team into something great. He gives up a prestigious position at a school, much to the confusion of his colleagues, to follow a call of the heart. When the Mighty Mites first start playing, they don’t even have shoes or a real football, but this coach is determined to make a difference.

The football team is not aware that Rusty is an orphan, and this secret weapon is what drives his determination. He realizes that his team might not have the muscular strength to match opposing players but develops revolutionary strategies to help them win. These strategies have even become what we know today about modern-day football.

As the team begins to enjoy a winning streak, these unlikely heroes start to stir up the hearts of their nation and even President Franklin D. Roosevelt. Considering the psychological and emotional turmoil of the Depression era, the inspiring story of this underdog team does much to heal and bring hope. Through the journey of coaching the Mighty Mites, coach Rusty finds his own healing too. Martin Sheen and Robert Duvall delight in their roles in this beautifully crafted and told story. It almost seems too good to be true.

12 Mighty Orphans is Ty Roberts’ second feature film and is actually based on a book, adapted from Jim Dent’s 2007 nonfiction book 12 Mighty Orphans: The Inspiring True Story of the Mighty Mites Who Ruled Texas Football. The scenes where you see them playing without shoes are all true! The film made its debut in June 2021 and opened at the Tribeca Film Festival three days later, where it was as well received as the latest Canadian online slots.

The film is set to be released on DVD and Blu-ray on the August 31, 2021 and will also be available on Digital HD from Amazon Video and iTunes on the same date.

12 Mighty Orphans is a welcome post-pandemic balm and the Texas Football movie we need right now. It’s Inspirational with a capital I! – Texas Monthly

The story is tailor made to tug your heart and get you to stand up and cheer! – Deadline